This is an expansion and cannot be played alone! 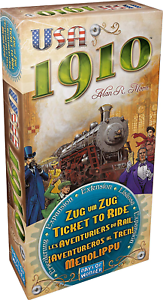 The rulebook is from the original game designer Alan R. Moon that gives you three additional different ways to play the game:

Packed in a stylish metal tin, USA 1910 contains brief rules for their use in no less than NINE languages (!) as well as cards and lots of them! First of all, the 110 small cards found in the original game can now be replaced with full size versions. There are also 69 Destination tickets consisting of full size reprints of the original 30 Destination cards, four cards from the Mystery Train expansion that Days of Wonder put out awhile ago and 35 “1910” tickets which offer new and different Destination cards. Capping off the expansion is a bonus Trans American Express card (aka the Longest Route card as in the original) which give 10 VPs to the player with the longest continuous route and a new bonus card: “Globetrotter” which awards 15 Victory Points to the player with the most completed Destination tickets. With the addition of the expansion, the basic rules remain unchanged. However, the dynamics of the play change depending on how the new cards are used.

In the 1910 variation, the standard rules are used with only the new 1910 cards and the Longest Route card from the original game is replaced with the Globetrotter card. The final variation is called The Big Cities. Only the 35 Destination cards featuring at least one of the Big Cities of the USA are used. (The Big Cities are Chicago, Dallas, Houston, Los Angeles, Miami, New York and Seattle.) These cards are shuffled and four are dealt to each player with at least two of them being kept. When drawing Destination cards during the game, four are drawn with at least one having to be kept. Of the three variants, this one is probably the most demanding as the action centers on the Big Cities creating the potential for heightened competition and that competitive flair spices things up!

The USA 1910 Expansion continues the progression we have noticed with the games in the Ticket to Ride series, namely a growing shift from the point generation of laying track towards the importance in completing Destination cards. As such, it shifts the perspective a player needs to have in constructing his game strategy towards winning and breathes new life into the original game. For players who have enjoyed Ticket to Ride, this expansion is a welcome energy boost that adds a little something without taking anything away. – – Herb Levy

Have feedback? We’d love to hear from you.

Reviewed by Ben Baldanza (Braun-Kohl Verlag, 2 players, ages 8 and up, 30-40 minutes; about $50) Affentennis, or 'Monkey Tennis', was a curiosity game at Essen 2006. How on earth could a game with that name and funny little monkey characters holding racquets actually be a good game? It may not help the case to know that the game was originally designed as 'Smurf Tennis', ...
Read More

Reviewed by Joe Huber (Amigo, 3-5 players, ages 8 and up, 30 minutes; about $9) One of the most interesting challenges for a game designer is to design compelling 'filler' - a game lasting less than 30 minutes for a typical group. Given a short duration, it can be very difficult to convey theme or other truly interesting decisions - what good is long term ...
Read More

Mind Expansion Back in the psychedelic sixties, all sorts of new philosophies of life flowered on the popular landscape. Some good, some bad, some just, well, strange. One of these came from Dr. Timothy Leary who suggested a 'Tune in, Turn On, Drop Out' approach to life that focused on mind expansion fueled by the use of a drug known as lysergic acid diethylamide. The ...
Read More
Reviewed by Chris Kovac (Ravensburger/Rio Grande Games, 2-6 players, ages 10 and up, 60 minutes; $44.95) When the Goths started coming, the Romans starting fleeing to the safety of Africa. This is the basic theme for the game Gloria Mundi by James Ernest and Mike Selinker, essentially a racing game with lots of resource/card management. The goal of the game is to be the first ...
Read More
Reviewed by Herb Levy (Uberplay, 2-5 players, ages 10 and up, 45 minutes; $39.99) Of all the games created by Reiner Knizia, perhaps the one that most piqued the interest of gamers here in the United States was Traumfabrik. In this Knizia creation, players vicariously enjoyed the role of film producers as they strove to obtain actors and directors and other essential personnel to put ...
Read More
Reviewed by Herb Levy (Asmodee, 2-6 players, ages 10 and up, about 45 minutes; $21.99) The ancient battle between the Greeks and the Trojans over the city of Troy is the setting for Iliad, the new card game designed by Dominique Erhard, where players attempt to amass the most powerful army and win sieges against their opponents. Iliad comes with three victory tiles and 110 ...
Read More

Reviewed by Herb Levy (Eggertspiele/Rio Grande Games, 2-6 players, ages 12 and up, about 2-3 hours; $59.99) As the saying goes: 'Borrow a dollar and the bank owns you, borrow a million dollars and you own the bank!' If you change 'bank' to 'nation', you'll have a pretty good idea of what is going on in Imperial, the newest design from Mac Gerdts. Imperial charts ...
Read More
Reviewed by Frank Hamrick (Da Vinci Games/Mayfair Games, 2-5 players, ages 8 and up, 60-90 minutes; $45) Leonardo Da Vinci was one of the most anticipated games at the 2006 Essen Toy Fair and, in this reviewers opinion, it lived up to the hype – mostly! The idea of the game, as designed by Flaminia Brasini, Virginio Gigli, Stefano Luperto and Antonio Tinto (Acchittocca), is ...
Read More
Reviewed by Herb Levy (Abacus/Rio Grande Games, 2 players, ages 10 and up, 30-45 minutes; $22.95) If you created a matrix crisscrossing the long list of games designed by Reiner Knizia with the long list of games using auctions as a central part of their design, you can make a serious argument that the cream rising to the top would be Knizia's Medici (featured in ...
Read More
Reviewed by Herb Levy (Asmodee, 3-5 players, ages 10 and up, 60 minutes; $44.99) HG Wells wrote about it and Orson Welles took it to the air and terrified us. Still others followed and took it to the screen: an invasion from Mars! But now, the proverbial shoe is on the other foot. Rather than Martians appearing on Earth, Earthlings get a chance to rocket ...
Read More
Reviewed by Ben Baldanza (JKLM/Rio Grande Games, 3-5 players, ages 7 and up, 90 minutes; $39.95) JKLM is a British company that has produced a nice lineup of games for each of the last few Essen fairs. Highlighting their output is the fact that they use varying themes and their games vary in depth. There is a decided transport bent to a subset of their ...
Read More
Reviewed by Pevans (Warfrog/Fantasy Flight Games/Esvedium, 3-5 players, ages 12 and up, 3-5 hours; $49.99) Perikles is the 2006 production from the brain of Martin Wallace. The game is about warring city states in Ancient Greece specifically, the Peloponnesian War between Athens and Sparta. Over three turns, the players command the forces of half a dozen cities in a series of battles. However, players first ...
Read More

Reviewed by Herb Levy (Z-Man Games, 3-6 players, ages 12 and up, about 90 minutes; $49.99) The 'pick up and deliver' genre of gaming is nothing new, whether it's railroads across the country or trucks barreling down lanes of highway. In Silk Road, the new game by Ted Cheatham and Bruno Faidutti, the venue shifts to the exotic world of camels and caravans as players ...
Read More

Reviewed by Herb Levy (Days of Wonder, 2-5 players, ages 8 and up, 40 minutes; $15) With the success of the Ticket to Ride series of games which include Ticket to Ride (Spring 2004 GA REPORT), Ticket to Ride: Europe (Spring 2005 GA REPORT) and Ticket to Ride: Marklin Edition (Spring 2006 GA REPORT), you have to wonder how many times designer Alan Moon can ...
Read More
Reviewed by Herb Levy (Ystari Games/Rio Grande Games, 3-4 players, ages 8 and up, 45-60 minutes; $49.95) Every game company believes in their line. On some level, the powers that be within the company need to believe that every game is a winner. Unfortunately, as we all know, while hope may spring eternal, hope does not always translate into reality and far too often, companies ...
Read More